Today, we will have a look at Alchemist Hellstrøm Sencha, a cocktail consisting of two main taste drivers: traditional Japanese Sencha Tea, and a traditional Scandinavian spirit, Aquavit, prepped and served on Hoshizaki ball ice.

With the opening of Alchemist in Copenhagen, a restaurant that was awarded two Michelin stars at once, only months after opening, Rasmus Munk introduced his concept of “holistic cuisine”. Two years before, he closed his ground-breaking restaurant to pursue his personal dream and a new adventurous challenge: Bringing to life an entirely new concept of dining. 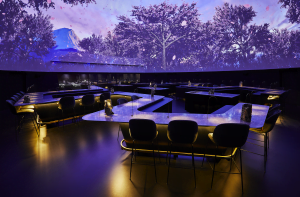 By designing, conceptualizing, and literally building the new ALCHEMIST, he brought the next big thing to Copenhagen…and frankly spoken he brought the very big next thing onto the global food stage. As the first guests of the new ALCHEMIST set foot into an unknown, yet triggering sphere where taste and texture intermingle with (audio-visual) art concepts to form a wholesome sensual discovery.

Apart from innovative and message-loaded dishes, Rasmus incorporated a series of cocktails as an integral part of his menu and made sure to include two Hoshizaki Ice Makers into his bar setup. For his cocktails, he uses big cubes and the famous Hoshizaki ball ice.

Sencha is probably the most popular tea in Japan. Over a third of Japanese tea productions are sencha tea plantations. There are many varieties of different quality grades. What makes good quality sencha so special is its manual production process. The handpicked leaves are steamed and dried several times. As a result, the tea has a sweet and round taste. Rasmus, who actively supports local suppliers of high-quality products, gets his Sencha from Sing Tehus in Copenhagen. 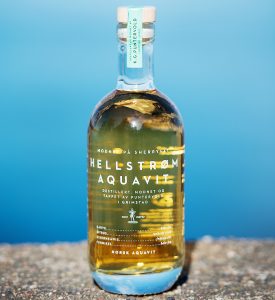 Aquavit or Akevitt is a traditional Scandinavian spirit, usually made from grains or potatoes and flavored with different herbs and spices. The EU regulates that the dominant flavor of Aquavit needs to consists of caraway plant or dill seeds, and a minimum of 37.5% ABV. Giving it a modern twist, Hellstoerm Aquavit from Norway is matured in American oak casks, that were used for a Spanish sherry production for twelve months. There are subtle vanilla notes that accompany other aromas such as caraway, anis, orange, and sweet licorice.

Prepped with and served on Hoshizaki Ball Ice

The Hellstrøm Sencha is prepped and served on Hoshizaki Ball Ice. With a diameter of 45 mm and a weight of 45 g, Hoshizaki Ball Ice is quite voluminous.  Due to its size and the extreme compactness, the dilution rate is low while creating a rapid chilling effect on the mixed ingredients.

Hoshizaki Ball Ice Makers work, similar to the famous Cubers, with a patented closed-cell system. Each ice ball is made individually by a dedicated spray of fresh water. This happens within a closed cell to achieve the highest possible compactness of an ice cube with the perfectly precise shape of a ball.

You can find out more about which cookies we are using here, or switch them off in settings.

When you visit our website or receive a newsletter from us, we collect information via cookies and other techniques. Cookies are small, simple text files that save to your computer or mobile device when you visit our website. The other techniques we use are JavaScript and web beacons. These are standard internet techniques along with cookies to ensure that a system can collect information (Java Scripts), can store this in small, simple text files (cookies) and then can send (web beacons).

We collect the following information (this list is not exhaustive): Internet Protocol (IP) Address; Browser type and Version; Geolocation; Clicking-behaviour. We collect this information for functional and analytical purposes.

Certain cookies can also be placed by a third party, for example Google Analytics to measure the use of the website (this are so called third party cookies). If you don’t want a website to place cookies on your computer, you can change the settings of your browser accordingly.

Strictly Necessary Cookie should be enabled at all times so that we can save your preferences for cookie settings.

If you disable this cookie, we will not be able to save your preferences. This means that every time you visit this website you will need to enable or disable cookies again.

This website uses Google Analytics to collect anonymous information such as the number of visitors to the site, and the most popular pages.

Please enable Strictly Necessary Cookies first so that we can save your preferences!